here are some scenic snaps i have taken on my early morning sorties.

as all the pictures of the covered advertising panels are of the same, quite uninteresting thing, and i do not wish to show before photos of the advertisements covered, i figured the only interest (and there is not much) lay in the location.

here is one from the corner of latrobe and spencer, out the front of the melbourne assessment prison, where i will most probably wind up inside of quite soon: 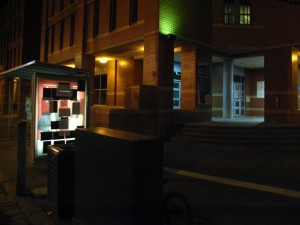 you got to laugh don’t you?

the melbourne assessment prison (map) is first stop (after the cells) when you have either been sentenced or refused bail.

you are supposed to get assessed and classified here so that you are sent to an appropriate prison, although once i was not assessed at all and was sent to port phillip prison (maximum security) for christmas and new year.

on the occassions that i have been assessed, my stated intention of continuing to act in the way that resulted in my jailing upon release made the classification team decide that i had to be classified as B, meaning medium security or higher, because minimum security prisons (classification C) were for people who wanted to be rehabilitated.

honesty is the best policy, duly rewarded by the justice system.

even if they did send me to a minimum security prison, i don’t think i’d be able to resist the temptation to make a comically pathetic escape attempt, as i am clearly not guilty of anything and therefore don’t deserve to be incarcerated.

anyway, this photo is on the spencer street bridge over the yarra, with views of all the lovely corporate-logo-emblasoned buildings of the city: 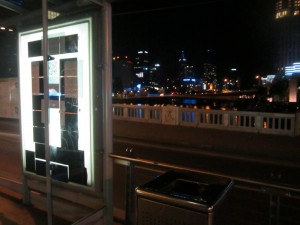 if you want to get a rough idea of the most powerful influences in our society, just look on the top of the tall buildings.

this one is alongside frown casino, the jewel of the south bank of the yarra: 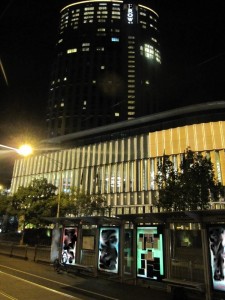 sometimes, when i get a little sad, i like to think of the high-rollers staying in the penthouse suites on the top of this tower — hard-working men getting their just reward — and i know that everything is in order, i am filled with joy, and i happily march on.

this one is out the front of the abc on southbank boulevard: 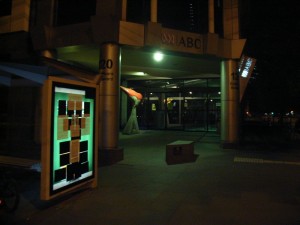 someone emailed me and suggested i cover ads out the front of the abc and advertising agencies, i obliged because i find it humorous (not the ad agency bit though, i don’t know where any are and don’t care too much).

this one is out the front of treasury on collins and spring: 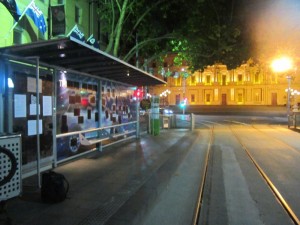 this whole shelter ad included a touch-screen video game inside the ad panel, and the sticker that covers the whole shelter went over a map of the public transport system.

this whole shelter was quickly cleaned the next day, as were other whole shelters i (poorly) covered, seeming to indicate the whole shelter ads are valued more highly by the ad company.

next time i was out i discovered that the stickers are quite easy to peel off and duly removed all the ones i was aware of.

they were not replaced, as i assume they are expensive to print and the ad company doesn’t have spares (they also require some effort and skill to apply), this pleased me somewhat — i liked to imagine the ad company boss doing his dumb awful nut over it.

this one is out the front of corporation arena, down at the tennis centre (site of the australian open):

one of many corporation arenas/ovals/stadiums/parks in melbourne that change their name every couple of years for our convenience.

this one is on batman avenue, high on the hill, looking over the bridge, to the m.c.g. (melbourne cricket ground, one of the hold-outs against corporate naming rights): 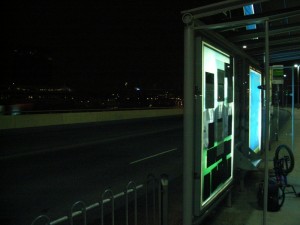 i couldn’t see the temperature/clock on the silo that paul kelly could from here, which makes me think i was in the wrong spot (should have been on punt road, up the top of the hill on the south bank of the yarra), but there is a fair chance it would have said 11 degrees.

i’m disappointed that paul kelly made reference to that temperature/clock on the silo without crediting it’s corporate sponsor, that should be illegal.

if only dog shits in parks had more longevity, we could then preserve them as part of our proud cultural heritage.

this one is on flinders street, looking down to fed square, our privately-owned public space: 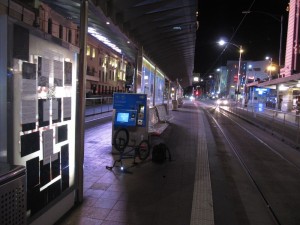 i wonder if the garish design of the north west corner of fed square (with it’s scrolling, multi-coloured lcd displays) was somewhat influenced by the prominance of advertising bullshit on that corner (swanston and flinders) — if you can’t beat the attention-stealing crudity, join it.

this one is on elizabeth street looking toward flinders street station: 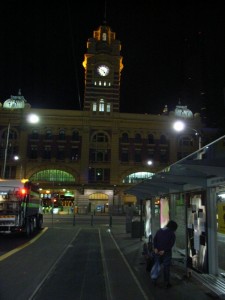 a curious early morning punter was wasting no time getting stuck into some reading, good on her. 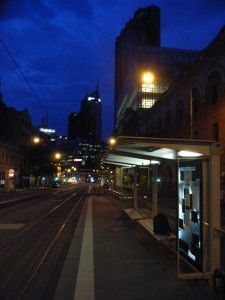 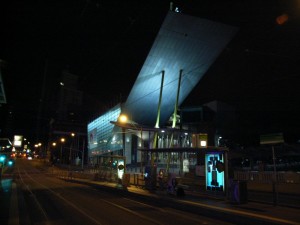 the full glory of the electronic power-drain on top of young and jacksons: 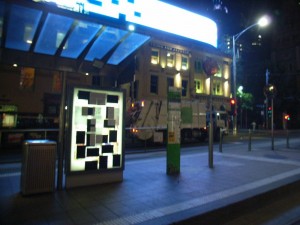 it lights up the whole intersection, all night long, 7 days a week — presumably to target the handful of hi-vis workers who happen to be in the area at 4:30am.

i questioned myself as to why it is okay for me to mention young and jacksons by name when i try not to name or display the image of any profit-driven company (particularly the multi-nationals) — the answer came back that i am all for small businesses where the operators receive a decent but not excessive wage, and pubs should be just that (even though they more often aren’t).

i imagine young and jacksons is owned by some hotel consortium that controls many seemingly individual premises — i just looked it up, yes it is owned by alh group that own a shitload of bars/hotels (over 300) across australia, with associated gambling operations (fucking pokies), as well as many booze retailers (over 460) including bws and dan murphys — the group is 75% owned by woolworths (one half of australia’s supermarket duopoly).

i guess it is a little stupid to try not to mention the names of the entities that are giving everyone a good dicking, but i also don’t want to pay them any individual attention — they are all fucked-up profit-mad psychopaths that we need to bring under control and put to work for the benefit of all, any more particular analysis is unnecessary.

here is one out the front of queen victoria market: 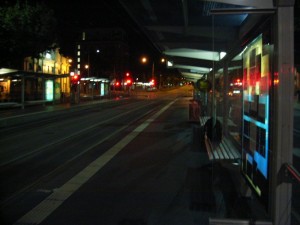 and one looking out past melbourne central, across swanston street to the state library:

notable absentees from the tourist trail are the victorian parliament and the national gallery of victoria — licences for advertising on the tram shelters in front of these institutions seems to have been refused in order to present a false sense of culture untouched by the vulgar nature of capitalism.