this morning i covered over the ads in one of our “super-stops” on swanston street (just below grattan street).

there are six panels facing in to the platforms and six facing out to the street.

originally i planned to just do the six facing inwards, but when i had done those i had some paste left over so i thought i would cover the text and company names/logos on the street-facing ads as well.

here are some photos i took when i finished about 6am: 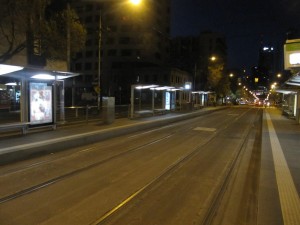 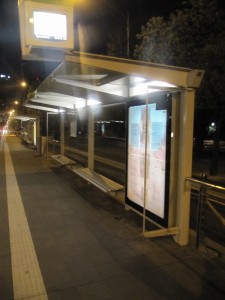 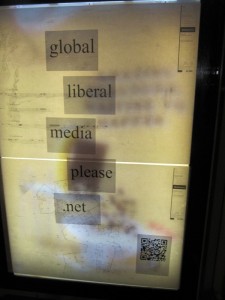 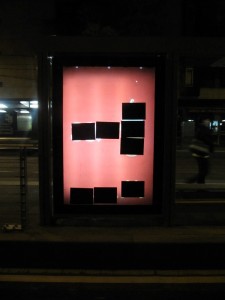 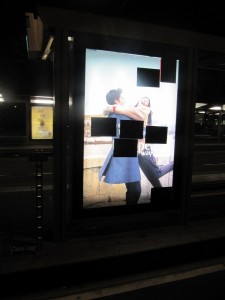 as you can see, the white building plans that cover the panel with just two sheets are a bit shit because they let the ad image through a little at night when the ads are lit up, oh well.

so i went back about 3pm this afternoon to see if they were still up and to get some photos of the covered ads in all their daytime glory and i found this: 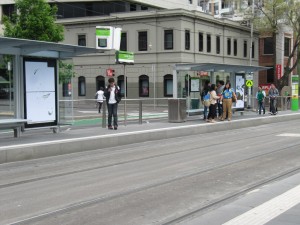 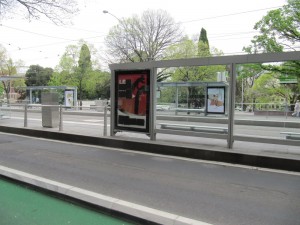 if i had to take a wild guess who might be responsible i’d say it was a young liberal* commerce student from the nearby melbourne university, but whoever it was, i’d love to interview them and find out exactly who they are and what motivated them to scratch down the posters — it would surely be a very depressing exercise but i’d just be too curious to refuse, given the opportunity.

i guess it is also possible that an ad company cleaner removed the posters conveying meaning, but didn’t bother to totally clean them by hand as it would be easier to wait until night when they could get the pressure hose in.

if it wasn’t a company cleaner, i feel like the person responsible might have seen me as a member of some ‘party’ of socialists, as is a common misconception — according to the poor understanding of quite a few people, to be against corporate/capitalist power is to be an authoritarian communist that is opposed to liberal democracy (which is stupidly conflated with capitalism).

i guess i should take this opportunity to declare that i am not, and have never been, in any way associated with any political party, socialist or not — i’m an independent liberal democrat, any contact with socialist gang members in the past has only served to piss me right off.

i feel like much of the future of politics is going to be a shit-fight against these sorts of dumb-fuck false dichotomies that have been burned into people’s head through a combination of cultural indoctrination and blinkering.

anyway, it’s always heartening to know that some people out there are willing to stand up for those poor multi-million-dollar-profit companies and defend the honour of the turds they take on the public’s faces everyday — people who have the decency to shut down any individual criticism that has somehow crawled out of the gutter and tried to speak without paying for the privilege.

again, for those who ask what ads were covered, and for justice kyrou who is concerned about the ‘information’ i am brutally denying the public, here’s the run-down of the ads:

there were 2 panels for airlines and one for a car — very important never-before-heard ‘information’ that is especially important ‘information’ considering the current chronic under-supply of atmospheric carbon dioxide.

one for dog food — news to me, i didn’t know there was specially made food for dogs, i thought they just ate other dog’s shits.

one for a fast-food chain selling extremely cheap junk — very important information for those of us who want to keep up the amazing levels of diabetes and coronary heart disease we have achieved here in the west.

a model in bathers (‘informing’ all the young girls how shit they are if they do not have the specific body of a swimwear model).

a university — great to know our ‘best and brightest’ are apparently still likely to make their choice of university based somewhat on the advertising of our increasingly corporate-like educational businesses.

also there was 3 panels taken up by a public safety message saying that trams are very heavy and roll along the tracks, so watch out! — it was really just marketing for the tram company (caring for you with their marketing budget instead of shamelessly self-promoting — ‘enlightened self-interest’), so i just covered the tram company logo and website and left the safety message bit (rhino on a skateboard).

* in australia, the liberal party is the major political party in our two party system that loves capitalism more than the other major party, the labour party — the young liberals are the youth members (under 30, i can still join!) who also love capitalism and other extremely shit things.