ad boss tries to boss me

i received this email on friday the 19th of october:

I received a report from a member of the public regarding unsightly fly posting on one of our bus shelters in Brunswick.  One of our employees has removed the offending posters and informed me that it was associated with your website.

Unless someone is imitating you, I’m assuming that you are responsible.  I don’t really want to escalate something so trivial any further and I’m sure that you could do without the hassle of police involvement.  I am requesting that you refrain from fly posting on JCDecaux assets in the future.

I would also like you to consider that the only person directly disadvantaged by this action was one of our cleaners who had to remove the material from an asset he is responsible for.  Our employees take pride in their work and are not paid corporate ‘pop star’ wages so perhaps these aren’t necessarily the people you are trying to disrupt.

Thank you in anticipation for your co-operation in this matter.

mister pallister was referring to this piece of work by my piece-of-work self: 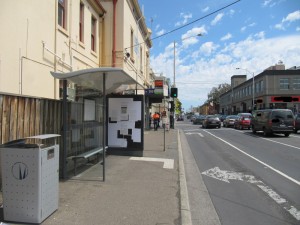 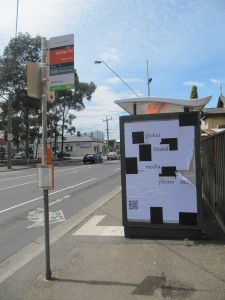 you can see that the maintenance worker has already pulled the posters up a bit, and you can also see his high-vis-orange reflection on the top of the bus shelter — my friend just happened to go past this site as the guy was starting to remove the posters: 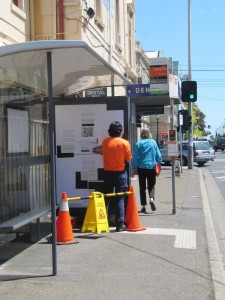 good thing he’s got that safety barrier there, he could elbow someone in the eye, or someone could get a little bit of pasty-paper in their mouth and they might be a coeliac.

he’s working hard (or casually, it’s hard to tell from a still photo) to reveal an ad for a car endorsed by an olympic sprinter and an ad for some sort of travel agency shit — two things we need more of: petrol-guzzling ‘performance’ vehicles and people flying all over the joint.

anyway, i saw the opportunity to send an antagonistic and inflammatory email back to this guy (who obviously didn’t read the posters or my website at all), maybe get him to give the police another poke up the arse.

early on monday morning (when i had finished my planned run and was all out of explanatory posters, but still had some black sheets and paste left) i thought i could cover another jcdecaux ad to add to the inflammatory content of the email i’d been meaning to send but still hadn’t gotten around to.

i did this in the only area i’ve ever seen jcdecaux street advertising, brunswick bus line shelters (they do have all the ads inside flinders and southern cross, but going in there at night when the stations are closed to the public is too much bother).

this was at the corner of glenlyon and lygon street: 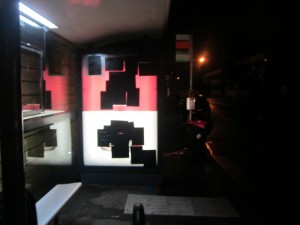 i am indeed personally responsible for the ‘unsightly fly posting’.

it is a bit rich of you to use the word unsightly, considering your company specialises in vulgar visual pollution that is not only aesthetically disgusting, but morally and politically repugnant.

the person who saw fit to inform you about your corporate advertising being covered by meaningful political comment concerning the corruption of our democracy by corporate/capitalist/for-profit forces obviously has horrible taste and no sense (lets call them a victim of the times).

if either you or your cleaners actually take pride in your work (rather than just doing what you do for the money to get by) you definitely need education in critical thinking and the concepts of democracy/justice/sustainability etc.

your cleaners are ultimately being inconvenienced by working for an ‘industry’ that is totally detestable, if they don’t like doing pointless shit, what on earth are they doing working for you?

i hope you adequately and proportionately pay your cleaning staff for all the work you get them to do, although it sounds like you have them on a contract where they get paid a flat rate for maintenance per shelter — if that is the case, you have put your employees on a shit contract for the financial benefit of your multinational company and it is you that should feel bad, not me.

if your cleaners did get paid extra for any extra work like they should, it’s arguable i’d be doing them a favour.

jcdecaux took a net income of 212.6 million euro last year, perhaps you could give your cleaner just one of those millions of euro to make up for the extra cleaning?

i thank you for your request to refrain from covering your advertisements, but i am happy to inform you that i will take no heed of that request, i went out of my way to cover one of your broom-broom car advertisements (sorry, one of your assets) on the corner of glenlyon and lygon street this morning especially for you dave.

i hope you don’t cause your cleaner more work by asking them to go down there immediately and forcefully remove those noble, hard-working, ad-blocking sheets of paper, the bus stop shelter works totally fine as it is now and commuters will find greater mental peace without the interference of your crass company.

you know, with atmospheric carbon dioxide levels as they are, it is awfully irresponsible of your company to be trying to get people to buy more oil-burners, especially ones sponsored by sprinters which presumably burn much more oil than your average fossil-fuel auto-mobile.

i am unconcerned if you choose to ‘escalate’ this trivial matter, i actually doubt you will be bothered, you’ve probably got something ‘better’ to do and i feel you don’t actually give a flying fuck about your cleaners.

thank you in anticipation for your acceptance of all my superior arguments (and for deciding to quit your ‘job’ to take up doing something useful rather than continuing to do something destructive and stupid),

a bit rough in places, and i used the word sponsored instead of endorsed, but i was pretty tired.

i didn’t hear back, unsurprisingly.

these wasteful pricks, who aim to increase the consumption of anything and everything, actually write this on the end of all their emails: ‘please consider the environment before printing this email’ next to a little green icon of a tree and a winding road — i guess that’s how they see the environment, as something you drive past and pretend to give a fuck about.

admittedly there is waste in what i’m doing, but it is waste i believe is necessary to properly challenge an industry of waste so enormous that it makes my waste look like a drop in the ocean — if i can push this issue into the public consciousness, it’ll be well worth it.